Who is the Scariest Character in Film?

We are counting down the days to Halloween and we are preparing ourselves for the first festive holiday in fall! To start things off this season, we are going to name our favorite scary characters in horror films. Every time we celebrate Halloween, we think of new ways to dress up and scare the pants off of one another and these characters never fail to produce.

Please be sure to comment below and tell us which characters give you the biggest scare.

The first one on our list, scared me to death when I was younger and still does to this day! He is the quintessential psychopath and most likely the worst brother in the world. Well at least, I firmly believe " Laurie Strode" played by Jamie Lee Curtis would agree me.

Michael Myers as a six old boy murdered his sister Judith Myers and was then admitted to a psychiatric hospital. After 15 years, he escaped to hunt down the rest of the family. This is by far my favorite character in any horror film. Michael is the diabolical character we all fear and think about when we walk into a dark house.

Halloween Trivia: Michael Myers mask is a stretched out white washed Captain Kirk mask. They didn't have a mask for the character when it came time to shoot the film. The production crew bought the cheapest mask they could find and spray painted it white. Not a bad job of improvising.

Freddy use to keep me up at night. This slasher terrified me! Is tonight the night Freddy is coming for me? Before his death, Freddy was a serial killer know as the "Springwood Slasher". When he was released from prison on a technicality; the family of his victims hunted him down and threw him in an incinerator. He turned into a dream demon and a took revenge on them by haunting their children. While they slept, he would stalk and kill them in their dreams. This would also kill them in real life; everyone knows if you die in your dream, you die in real life (is that true????). This character will keep you up at night, so I will not spoil anymore of this classic horror film for you.

There is also a more up to date version that was released in 2010. I haven't seen "A Nightmare on Elm Street (2010)", so please let me how it was in your comment below! Both trailers are included for your viewing enjoyment.

A Nightmare on Elm Street 1984 Trailer:


A Nightmare on Elm Street 2010 Trailer:

I remember watching scream for the first time in the movie theaters. It was a phenomena back in the mid 90's and Ghostface is still one of the scariest characters in any horror film today. The opening scene is still one of my favorites from any horror film. Casey Backer played by Drew Barrymore's is taunted with phone call that starts as a playful game of chess then turns diabolical. Ghostface draws out as much fear as he can in her before he attacks.

Taking place in Woodsboro, a small fictional town that could be anywhere USA. Ghostface is out for revenge against Sidney Prescott. He taunts her through creepy phone calls and kills those who are close to her. So not to spoil any surprises for your Halloween night, I will stop at this point. But for sure, Ghostface will make you jump out of your seat. Throughout the entire movie this slasher keeps you in suspense; not knowing when or where he will pop up next.

Scream Trivia: Did you know the Mask for Ghostface is based on "The Scream"(1893)by Edvard Munch? 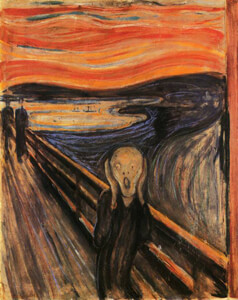 No Halloween fright-fest would be complete without Jason Voorhees. The madman who haunts Crystal Lake to avenge the death of his mother. We have all walked down that dark and quiet wooded road; scared that Jason donning his hockey mask and wielding his machete was going to come after us. Truly one of the most terrifying characters. Friday The 13th is perfect for a freight on Halloween night! Since there are so many Friday the 13th movies, I picked the latest release to showcase. Which is your favorite one?

Friday the 13th Trivia: Did you know that the film was being advertised before it was even financed. An ad was taken out of the July 4th, 1979 edition of variety. Featuring the logo bursting through glass.source

What do you think is the scariest character in any horror film?